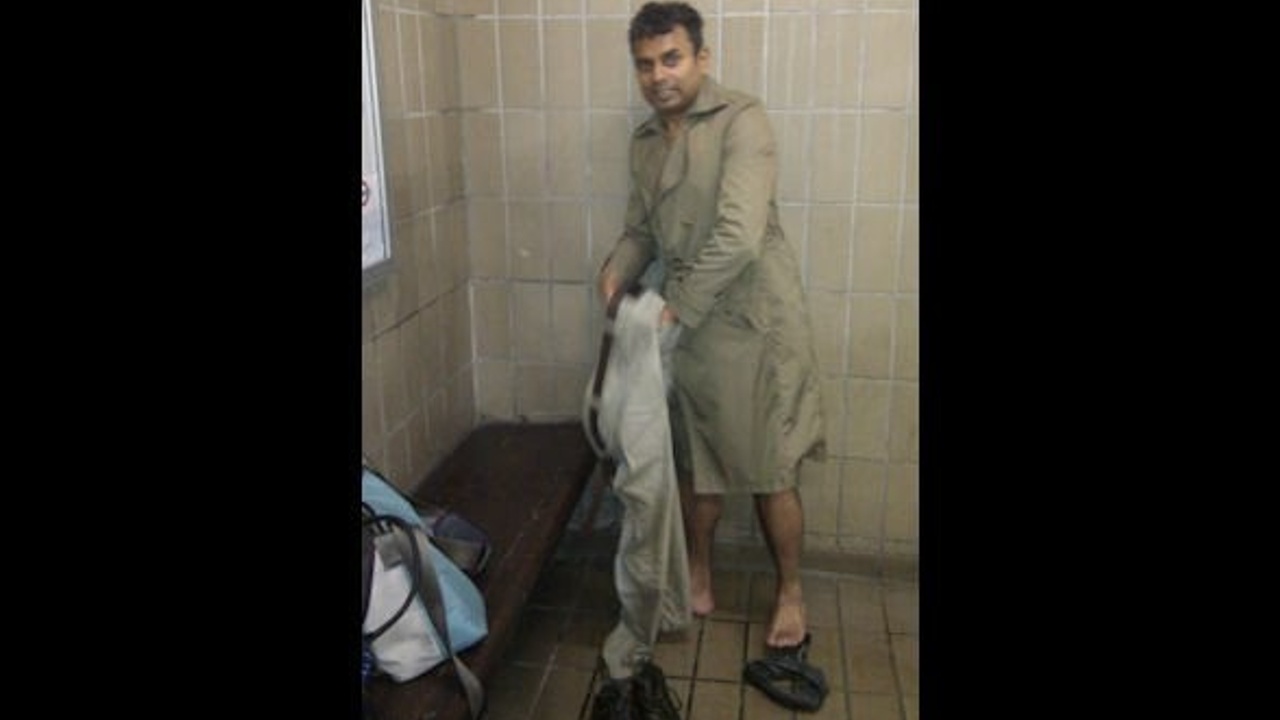 I just got home, wearing nothing but a Mac!

I was walking along the canal in London’s Camden Town, my head down as I chatted with my fiancé and our friend after her first Mixed Group with us. As we strolled along the canal a couple of young men cut between them and I. I began to casually look up to see who they were and I saw they were offering me a bag of weed (marijuana) so I quietly said “no thanks” and continued walking. Before I knew it, one of them pushed me in the canal.

I was wearing heavy clothes that soaked up the wet, and had a heavy bag over my shoulder pulling me down. It took me a while to get to the bank and hold on. Once there, I was getting heavier and heavier. My fiancé shouted at them with filthy rage. They strolled off along the canal without a look, a laugh: nothing. So I made it to the bank and held on tight as I asked the girls to take the bag off me. Once it was off, I was still too heavy to lift myself out of the water. A guy on his pushbike stopped and hoisted me out. I was soaked. We explained what had happened to the bike guy and a local security guard who showed up, then we walked on down the canal towards the train station.

I didn’t feel bad, mad, angry, or even shocked. I was level-headed throughout the whole thing, considering how best to get home, and calling the cops to get a crime reference number for my iPhone. I had been very scared as I clung on to the edge of the canal, not touching bottom until the bag was off me. My fiancé Angela said I had the look of terror of a helpless child while I was in the water.

I dripped my way home on the train and half an hour later my clothes were beginning to get heavy, cold and nasty. Which cab would take me? We realised that our connecting train would not show up for another 14 minutes. I discussed taking off my clothes and wringing them in the public toilet at the train station while waiting. Then Angela had the bright idea that I should take them all off and just wear her mackintosh—a raincoat. Nothing else! Terrible idea, as I was afraid of ruining her nice Italian Mac and by now I didn’t really want to move as I began to feel cold and soggy. Plus, I didn’t want to go around looking like a dirty old man!

Luckily the waiting room—which has a large glass wall—was empty and I just started to get undressed, with Angela holding the Mac around me. What a relief to get out of those clothes, and man, they were heavy! Our train arrived and it was pretty packed. I stood in the corner and Angela in front of me to shield me from the public. Luckily, no one noticed how I was dressed until our stop, when the Essex girls got an eye full and I turned into a sheepish little boy, as Italian style allows for only one perfectly placed button below the waist. I was holding it together, as the button was not perfectly placed to cover up my embarrassment.

I remember thinking, while I was panicking in the water, that in some way, karma would kick their arses. For a moment, that felt good. I remember wondering “Why me?” at that moment. I got as far as: Maybe it was because I was happily strolling along the canal with a couple of pretty girls, looking quite good in my organic cotton pants, pink Pierre Cardin polo shirt, pseudo-designer hoodie and Paul Smith bag. Maybe I looked like a plumped-up peacock who needed to be put in my place. Purification by water? I wonder what those guys have going on in their lives. I wonder how dead they are inside to not even look back or laugh. I remember feeling that dead inside, and I was only thinking today about the downer I was on a few years ago: so low that even when I received an email telling me that I’d won a holiday to Spain, I didn’t even smile.

I wonder if I will go into shock, get angry or worse, continue to feel scared to walk along the canal alone at night, as I often do on Monday and Wednesday evenings after running my Men’s Groups in Camden Town. If these guys are caught, I would love the opportunity of having them in one of my groups, just to kick back together and find up what’s up. They are men, too, and surely something must be out of sync in their lives if this is how they express themselves.

I love the freedom I have to walk the streets—and countryside—at night, pretty much wherever and whenever I want to. Losing it even temporarily reminds me that this is one blessing of being male that I count on, as if I were a woman I probably wouldn’t feel this privilege.

Only three weeks ago I was walking this same stretch of canal dressed up as a pirate, with a load of other people raising money for local community charity The Pirate Castle, who last year bought a fully wheelchair-accessible barge and other bits and bobs for the children and local ‘disadvantaged’ groups that use their services. I guess I have been determined to make a splash, one way or another!

First Published on 25th June, 2012 on The Good Men Project